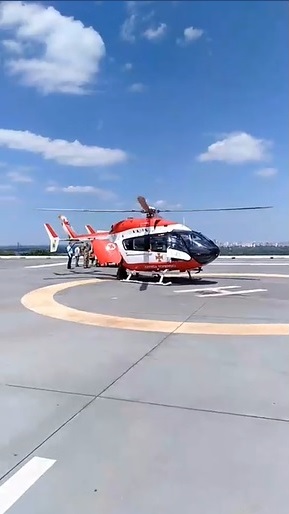 At the service of security service of Ukraine, for the purpose of urgently transporting a heavyweight soldier from Kharkiv to Kiev, the CEC «Parkovy» granted permission and provided all available resources for the landing and take-off of medical transport from the helipad of the congress and exhibition complex.

A soldier from Khmelnitsky, who was seriously wounded during a shelling in the Lugansk region, was taken from Kharkiv to the center of Kiev for a few hours to a medical facility.

According to Aleksey Strulev, deputy director of the «Parkovy», «we immediately responded to the request of the security service of Ukraine to grant permission for landing and take-off of a medical helicopter with a wounded soldier on board. When it comes to the life of a person, and even more so the protector of Ukraine, who suffered in opposition to the enemy, another decision could not be».

Information:
Helicopter site, which is located at: Parkovy Road, 16a, is a part of the Congress and Exhibition Center «Parkovy». Since its commissioning in 2012, it has been used only for several purposes.
At present, the Prosecutor General's Office has initiated criminal proceedings on the legality of the allocation of land and the issuance of a building permit, the investigation is being conducted. The management of this facility is carried out by Sergey Moskovsky, a new owner of the «Parkovy», who acquired the complex in December 2017.